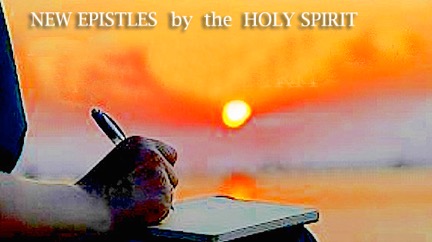 WORD OF THE LORD: ASK ANYTHING PART 2

John 15:7  If you abide in me, and my words abide in you, ask whatever you wish,and it
will be done for you.

You Speak False WORDS formed out of your FALSE concepts of written in stone doctrines.

Nothing is Written in Stone, since I have said, "ASK ANYTHING!"

So Change is coming for those who will ASK. Those who think I am set in Stone, then you can have
what you fear.

I don’t do END TIMES. I am the GOD who makes all THINGS NEW. NEW THINGS are COMING.

I AM DOING A NEW THING and those who are Asking and believing for CHANGE will see it and
Move with it.

The Rest will be Left Behind, since their thinking in Letter of the LAW doctrines will not allow them Wisdom.

I am Sweeping Away all that has Come Before, Making a way where there was No way, to bring in a NEW WAY, A NEVER BEEN DONE BEFORE WAY!

STOP LIMITING ME. STOP TRYING TO PUT ME IN YOUR BOX of LIMITATIONS.

I HAVE NO LIMITS!

I AM NOT RUNNING OUT of CREATIVE WAYS TO REPLACE today's DEAD WAYS.

MOVE your MIND to my Mind, and Let's MOVE on to New Places. Get Ready to Be TRANSFORMED
through the Spirit of your MIND.

EXAMPLES  of GOD Changing his Mind when Asked.

CLUES on what to Ask

James 1:5  If any of you lacks wisdom, let him ask God, who gives generously to all without reproach,
and it will be given him.

Psalm 122:6    Pray for the peace of Jerusalem: they shall prosper that love thee.

ASK ANYTHING PART ONE

John 15:7  If you abide in me, and my words abide in you, ask whatever you wish,
and it will be done for you.

I am Learning that NOTHING is SET in STONE. Nothing said about the future is set in STONE since we have been told to Ask Anything. I have often Pondered this. I think now everything we are learning is to bring us to the place of Changing everything by Asking for it.

In Other Words We can ASK for a Different Reality, rather then settle for the one we are told is coming. Instead of looking for the End, what if we could Produce a Whole New Beginning, simply by ASKING for it?

This would of course be Heresy. This takes FAITH that OVERCOMES the World. What if Overcoming the World is simply done by Decreeing your own New Beginning.

Job 22:28 Thou shalt also decree a thing, and it shall be established unto thee: and the light shall shine
upon thy ways.

In John 15:7 Jesus is speaking only to his very close circle of disciples. Asking anything would be something that the Holy Spirit had put on your heart. It would be a result of hearing from the Lord, and walking in the SPIRIT.