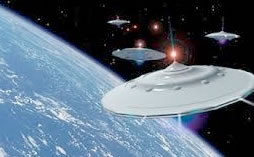 The Mind set on the Subject of UFO'S and ALIENS is so Carnal, that the views are so distorted and lacking in Perception, it is a wonder humans have lasted this long? ( all so called Christian books and Views on this subject included )

In the Days Ahead we will be Unfolding the Mysteries that have been HIDDEN concerning these issues, some of which I have already discussed/ and many more, as the Holy Spirit allows.

We are Standing on the Brink of a New Perception of Reality/ But the Human Race is so easily Fooled, that it is just being set up to be Deceived once Again/

Man kind has been herded like cattle by these Aliens since the beginning of Time, and now all of a sudden people want to find out about them, as if they could actually find out anything that the Aliens didn't want them to find out?

As if humans could understand them, and communicate with beings that have been using us, in ways that are passed our understanding.

Yes the Human race has been Visited, Controlled, and used as their slaves for thousands of years/

That is just putting it mildly. The TRUTH is WAY over your heads/

But there are those who have created Movements to Disclose this Info, as if there was anything going to be brought
out that the Aliens did, or did not want brought out/

Humans thinking they can do something about this issue just because they want more INFO.

As if HUMANS could know if the INFO was TRUE or not? Wow, humans are so stupid. The Carnal Mind is so LOW, it is its own worst enemy. ( It is Artificial Intelligence, or lack of intelligence.)

All present day technology was given to us by Aliens, to use us to Advance their Cause/

Everything going on is to Promote their Agenda in some way/

Again WAY over our heads.

THE TRUTH is not out there, the TRUTH has been here all along, but know one has been able to Grasp it/
Till now/ ( by the MIND OF CHRIST ONLY )

The Time has Come for the TRUTH to be known, and believe me, people are not going to Listen to it,
much less like it.

Humans are not big on TRUTH, and there are very few who would actually know it when they heard it/
( the Carnal Mind has no discernment )

People have their own made up beliefs, and you can not bring them a NEW CONCEPT of REALITY unless it adds up with the Box they have created to Live in.

There are Large groups of People listening to and sharing these ideas nightly, and they are all in a mental Box of limited ideas together/

The Reason that they can not know the TRUTH, is they are all using their CARNAL MIND to understand things,
that can not be Understood with the CARNAL MIND.

On Top of that, they would not even know what that means/

These Aliens are MASTERS of deception, and Manipulation of the CARNAL MIND.

They Feed the Carnal Mind Dis Information 24/7. through Media/ religion/ etc. This is Called MIND CONTROL.

The CARNAL MIND is the closest thing to being a Robot as anything will ever get. YES HUMANS with their CARNAL MIND, are  like ROBOTS being used by Aliens. ( the Carnal Mind is Programmed to Feed you
Dis information )

THE NEW BIRTH is what GOD has Offered the HUMAN RACE to set them FREE from this LOW MINDED life.

These Aliens have been conditioning Humans to believe what they want them to believe, about DISCLOSER/
Yes its coming, and the HUMAN RACE will believe a BIG WHOPPING LIE/ because they refused to get a
NEW MIND.

GUARANTEED to Destroy the works of the Aliens. ( better known as the devil )

SWORD OF THE SPIRIT/ OUR WEAPONS are not CARNAL

2Cr 10:4 For the weapons of our warfare [are] not carnal, but mighty through God to the pulling down of strong holds;

Eph 6:17 And take the helmet of salvation, and the sword of the Spirit, which is the word of God:

Hbr 4:12 For the word of God [is] quick, and powerful, and sharper than any twoedged sword, piercing even to the dividing asunder of soul and spirit, and of the joints and marrow, and [is] a discerner of the thoughts and intents of the heart.

THIS SWORD is for the Removing of CARNAL LIES that DESTROY the MIND.

Jer 23:29 Is not my word like as a fire? saith the LORD; and like a hammer that breaketh the rock in pieces?

MIND CONTROL PROGRAM'S That Keep the CARNAL MIND in its Cage

Number One is Religion, then Politics, or some New Carnal Concept of Spirituality. Without the HOLY SPIRIT know one has any idea of what the difference is between, being SPIRITUAL or being CARNAL.

Man manipulates Man, while at the same time he is being manipulated by forces that he has know concept of/ ( man has never been in control since the beginning when Adam lost the Planet to the enemy in the garden )

All Wars, rumors of wars, Covert or Conspiracy theories/ all Mind Control.

All Religion's are MIND CONTROL / They keep the masses in check, and keeps Man in Bondage to his CARNAL MIND while he is fooled thinking he is growing spiritually/

This is the Biggest Lie of the Devil/ the Biggest FRAUD that the enemy of this Planet uses/ and it works every time/ Just look at the results of this Sick Programming/ People are now fighting and killing over Religion/ How can anyone in their RIGHT MIND think that is Spiritual?

Why would anyone in their Right Mind want to serve a God of Hate?

This is TOTAL MIND CONTROL from Birth/ Teaching people from Birth to Hate others, who do not believe as they do is CONDITIONING of the MIND to keep it CONTROLLED to Dis Information, never Questioning it/ just following along like a Dumb animal in a Yoke. That is man, and Religion.

These Perpetrators invented Religion to keep everyone's MIND under their Control/ feeding them dis information of enlightenment. Pitting one culture against another/

The CARNAL MIND is the MIND of a Robot, doing its Masters Bidding without Question/ It has know idea there is FREEDOM in the SPIRIT/ It is Lost in a WEB of Dis information, that Keeps it from even Looking for the TRUTH/

Messages sent from outside of Time, into Time, to the Future Time Weavers of the Ages to come.