Mark 16:20
And they went forth, and preached every where, the Lord working with them, and
confirming the word with signs following. Amen.

Acts 14  So they remained for a long time, speaking boldly for the Lord, who bore witness to the word
of his grace, granting signs and wonders to be done by their hands.

This is an Inditement  on what is being SPOKEN  today.  If nothing Happens to Confirm  what was Spoken  then it wasn’t of FAITH  or it wasn’t   GOSPEL NEWS,    it was man’s  doctrine

God is not Confirming Doctrines,  there is NO FAITH in hearing doctrine, regardless of how
good it sounds.

FAITH comes from Hearing GOOD NEWS  about JESUS who is  ALIVE

THAT is what Produces  Signs and Wonders.  No Wonder nothing is Happening, know one is  Talking about JESUS and the Never Ending   ETERNAL  FUTURE. They’re rehearsing  the Past,  or pointing
to the Problem.

MEANWHILE  JESUS is ALIVE  NOW.   He Hasn’t Changed,   He is working with Us to CONFIRM  his SPOKEN WORD  of FAITH,   though those who  BELIEVE.

Are SIGNS and WONDERS FOLLOWING  anyone  You know or  Listen to ??

We are to be a  Walking Living, Breathing   SIGN  and WONDER

Well as Believers  we already have some of the signs and wonders operating in us,  we have
to keep making a Demand on the Anointing to receive More.

You have to be Anointed  by the Holy Spirit to Preach the Good News effectively with POWER.

Being a Witness  or Proclaiming the Gospel  is  Number ONE.

The Baptism of the Holy Spirit of speaking with other tongues is another Sign.

Having No deadly thing harm you, like a Plague is another Sign, meaning  you can’t be
harmed by a Plague or a Poison,  Pharmakia  ( vaccine )  Either one —  this is a Sign,

Mark 16: 18  18 they will pick up snakes with their hands; and when they drink deadly poison,
it will not hurt  them at all; they will place their hands on sick people, and they will get well.”

Actually   There are more Signs and Wonders going on in my Life, then most churches,

Acts 9: 11 And God wrought special miracles by the hands of Paul:

All Kinds of examples of Special  miracles  one of course is Phillip getting Translated after
he obeys and goes to Samaria to Preach.  Signs followed him when WENT to PREACH all  ALONE,
HE  OBEYED.  HE was A walking SIGN/   Others followed him.   Acts 8

TODAY Just Being on PAGE 2 of GOOGLE without Paying for it is a Special Miracle.

The LORD PROMOTES us On HIGH because we have known his Name. 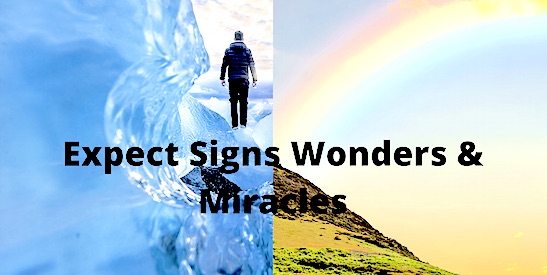