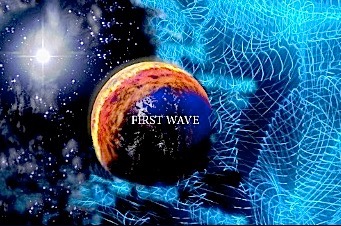 Act 2:1 And when the day of Pentecost was fully come, they were all with one accord in one place.

Act 2:2 And suddenly there came a sound from heaven as of a rushing mighty wind, and it filled all the house where they were sitting.

Act 2:3 And there appeared unto them cloven tongues like as of fire, and it sat upon each of them.

Act 2:4 And they were all filled with the Holy Ghost, and began to speak with other tongues, as the Spirit gave them utterance.

The DAY of PENTECOST is the DAY when the HOLY SPIRIT came On those who where in ONE ACCORD/ The Upper Room was a Place of UNITY between men and women.

THE  FIRST WAVE/  this Started our TRANSFORMATION/

This Event was so AWESOME/ BUT not much is taught about it/ Yet this Event was just a Prelude for the coming WAVE which will produce a TSUNAMI in the Spirit.

There are Words used in the New Testament attempting to describe these events but Sadly the Real Meaning of these Words has been completely Lost or distorted/ Know one bothered to Research the Meaning of these Words, they assumed they knew what the Words ment/ so the interpretation has been in ERROR for many, many years/ taught over and over incorrectly.

This WORD Trump/ which implies a sound/ Means WAVE/ Reverberation/ Shaking, Quaking/ and MOVING of the MIND. 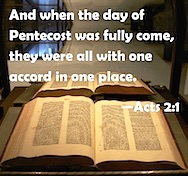 Means
1) the highest part of the house, the upper rooms or place where the women resided

5228 and on
Far Above, beyond measure, Grow exceedingly, To TRANSCEND

The Word Upper Room/ is a TRANSCENDENT place/ Illustrating HIGHER AWARENESS/
Oddly there are several other Scriptures that are Cross References for this Same Event.

Act 4:31 And when they had prayed, the place was shaken where they were assembled together; and they were all filled with the Holy Ghost, and they spake the word of God with boldness.

Act 1:11 Which also said, Ye men of Galilee, why stand ye gazing up into heaven? this same Jesus, which is taken up from you into heaven, shall so come in like manner as ye have seen him go into heaven.

Jhn 14:3 And if I go and prepare a place for you, I will come again, and receive you unto myself; that where I am, [there] ye may be also.

1) to take to, to take with one's self, to join to one's self
a) an associate, a companion
b) metaph.
1) to accept or acknowledge one to be such as he professes to be
2) not to reject, not to withhold obedience
2) to receive something transmitted
a) an office to be discharged
b) to receive with the mind

1Th 4:16 For the Lord himself shall descend from heaven with a shout, with the voice of the archangel, and with the trump of God: and the dead in Christ shall rise first:

WAVE/
Tossing or swell of the Sea
(through the idea of quavering or reverberation)
1) to shake, agitate, cause to tremble
a) of men, to be thrown into a tremor, to quake for fear
b) metaph. to agitate the mind
b) to move (the mind of one)

Dan 7:13
I saw in the night visions, and, behold, one like the Son of man came with the clouds of heaven, and came to the Ancient of days, and they brought him near before him.
Rev 1:7
Behold, he cometh with clouds; and every eye shall see him, and they also which pierced him: and all kindreds of the earth shall wail because of him. Even so, Amen.
Revelation 22:4
They will see his face, and his name will be on their foreheads.