PASLMS 2:4 He that sitteth in the heavens shall laugh: the Lord shall have them in derision.

The Lord has already stated that Judgement begins at the House of God and the Judgement is on the Fake Church,
that Preaches the Fake Gospel.

Right now our Nation is in Free Fall where we seemingly have NO LEADER. The Nation is at a Stand Still while we
await the outcome of Counting Votes.

This is an EXAMPLE  of the  Fact that we have NO SPIRITUAL LEADERSHIP.  The Nation has been Worshipping
the President.  (  Worshipping this Kingdom,  Making it Great. )

God is not going to allow his People to Choose a King other than  the KING OF KINGS,   the LORD of GLORY.

God is now Gagging out on Hearing this FAKE GOSPEL  of MAN'S WORKS.

The  MAKE AMERICA GREAT AGIAN GOSPEL  Is a Gospel of MAN'S WORKS.

Man Lifting up himself and magnifying the Works of his own Hands. Man thinking he is Doing anything
Great without God's Help.

So God is not going to allow a Man to Boast in the WORKS of his HANDS,  so He has brought things to a
complete Halt, while he  Reminds us that he is OUR LEADER.  HE IS THE ONE MAKING US GREAT.

WE ARE ONE NATION UNDER GOD — NOT KING TRUMP!

So the FAKE CHURCH  has Not been Preaching the GOOD NEWS  OF his KINGDOM but the
MAKE AMERICA GREAT AGAIN  GOSPEL   which  has brought the Nation back down to WORKS,
While Lacking any Awareness of what Allows our Nation to be GREAT.

The Lord Spoke to me in June of this year that  the President needed to DECREES.  Then in Sept he Stated that
The  President had become like Nebuchadnezzar.   He has a Spirit of Pride and Delusions of Grandeur.

Dan 4:30  The king spake, and said, Is not this great Babylon, that I have built for the house of the kingdom by
the might of my power, and for the honor of my majesty?

Pro 16:18   Pride goeth before destruction, and an haughty spirit before a fall.
Dan 5:26 This is the interpretation of the thing: MENE; God hath numbered thy kingdom, and finished it.
Dan 5:27 TEKEL; Thou art weighed in the balances, and art found wanting.

The  Lord  said the President  Must DECREASE so we are Watching the LORD at work, Dealing with that
Spirit of PRIDE,  while  getting the NATION'S  Eyes Back on their God — OUR REAL LEADER — Who is the
only one going to Resolve this VOID of LEADERSHIP. 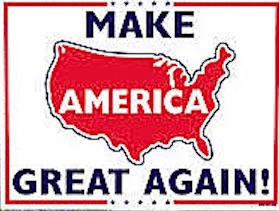 RIGHT now the Nation is  REAPING  what  it has  SOWN  for 4 Years,  the FAKE GOSPEL of Making America Great  /
MAN'S WORKS.  Now God is Bringing  it to NOUGHT.  It has Now Produced   NOTHING.

AMERICA  is in LOCK DOWN.   The GREAT AMERICA Boasting in her Great Works  is  UNDER the CURSE by Preaching
This FAKE  Gospel  of Greatness. Following  a False King, who has been Building a CARNAL Kingdom,  not God's.

So here we are,  WAITING on our  REAL LEADER and LAW GIVER.  He is the one  Stand Up for our HELP and
bringing  us  Real Leadership that will have nothing to do with Politics.

So the Lord is separating what is and what isn’t his  BODY.

His Body is Not Looking for a Political LEADER. His Body is not Preaching a WORKS  GOSPEL.
HIS BODY is going to be PREACHING  the REAL GOSPEL OF HIS KINGDOM.
NOT THE GOSPEL OF THIS FAKE KINGDOM.

Our Focus has to be on  Hearing from the LORD on how to move up above  this and be Allowing the Holy Spirit
to Move us to a New AWAKENING of the SPIRIT.

So Get your MIND OFF CARNALLY MINDED   NEWS.  Stop Listening to the  MAKE AMERICA GREAT AGAIN  GOSPEL.

Our Focus is to be on the REAL GOOD NEWS of Preaching the  Gospel  of the   NEXT REALITY?
The EVERLASTING KINGDOM.

We are to be  Spreading the GOSPEL of HIS KINGDOM that is coming,  not trying to save  this One.

This Reality is Crashing and on the Countdown to its End. THE GOOD NEWS is  A NEW REALITY IS COMING.
And we Already have a KING  his Name IS JESUS.  He is  Watching over the KINGDOMS of this WORLD,
he has them in Derision.

PASLMS 2:4 He that sitteth in the heavens shall laugh: the Lord shall have them in derision.

WHAT TIME IS IT, PEOPLE?

We are living in Perilous times,  We are in Perplexity of Nations on the  verge of the Tribulation.
God is Ready  to OPEN UP A WHOLE NEW WAY  to get his People Back  to  Doing things HIS WAY.

BIG CHANGES are COMING and If you're Looking to your Government for HELP you will be  DESTROYED. 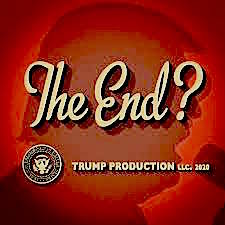