Growing Up In His Stature

1Cor 2:13 Which things also we speak, not in the words which man's wisdom teacheth, but which the Holy Ghost teacheth; comparing spiritual things with spiritual. 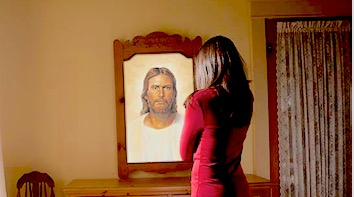 WHO'S IMAGE DID YOU GET BORN AGAIN TO BE? Did you Put on Christ or not?

1 John 3:3
Behold, what manner of love the Father hath bestowed upon us, that we should be called the sons of God: therefore the world knoweth us not, because it knew him not.

Gal 3:27 For as many of you as have been baptized into Christ have put on Christ.

The Word of God is Very Clear on who it is We Get BORN AGAIN to be. It is very Important to see yourself as Who you are as a NEW CREATION, or there can be no Spiritual Growth or EVOLVING into his STATURE.

We Did not Get BORN AGAIN to be a BRIDE, We are Born Again in his IMAGE, the IMAGE of the SON OF GOD. The Bride is not a New Creation? The Bride has NO AUTHORITY.

When you Call yourself a Bride you are actually DOWN GRADING your OWN POSITION in CHRIST.

You have DOWN GRADED your AUTHORITY in Christ, since a bride is SUBSERVIENT to her husband.

The Bride is an allegory of our relationship with JESUS, which is to be Very Intimate.

The Bride is not Evolving into the Fullness of the Stature of JESUS CHRIST. The Bride is just a symbol of Holiness, and consecration to the Lord.

The Bride is an allegory which turns into New Jerusalem.

Rev 21:2
And I John saw the holy city, new Jerusalem, coming down from God out of heaven, prepared as a bride adorned for her husband.

We are TO CONFORM to HIS IMAGE, the IMAGE of the SON OF GOD.

Romans 8:29
For whom he did foreknow, he also did predestinate to be conformed to the image of his Son, that he might be the firstborn among many brethren.

ALL AUTHORITY has been Given to the SON (not the bride, the bride has NO AUTHORITY at all).

MATT/ 28:18
Then Jesus approached them and told them, "All authority in heaven and on earth has been given to me.

Ephesians 4:13-18
13 Till we all come in the unity of the faith, and of the knowledge of the Son of God, unto a perfect man, unto the measure of the stature of the fulness of Christ:

14 That we henceforth be no more children, tossed to and fro, and carried about with every wind of doctrine, by the sleight of men, and cunning craftiness, whereby they lie in wait to deceive;

We are to be GROWING UP into a PERFECT MAN who reflects the Fullness of CHRIST, THE HEIR.

THE SON OF GOD

The allegory of the bride comes out of the OLD TESTAMENT, where God is always telling Israel that he will be a husband unto them, if they would stop playing the Harlot. It is a familiar allegory of God pursuing Israel, even though they where pursuing False Gods.

But God wants us to be EVOLVING into the HEIR/ HIS SON, who we are called to become. We are not evolving into a Bride, a Bride has no Authority and she is not the Heir.

All Authority has been given to the SON. Are you Growing into the FULLNESS of the Stature of JESUS CHRIST? DID you PUT ON CHRIST or not?