2Ti 1:9 Who hath saved us, and called [us] with an holy calling, not according to our works, but according
to his own purpose and grace, which was given us in Christ Jesus before the world began,

Before Time Started, God had a Plan and a Purpose to accomplish according to his Good will.

He Chose us and Preordained us to Accomplish his Will  to accomplish what he wanted to accomplish.
This Whole Evil Age Reality,  was for God's  Good Pleasure.

Before Time started we agreed to be apart of his PLAN. To be used by the Lord to accomplish whatever
his Purpose was. We agreed to set aside This TIME for Him. We VOLUNTEERED for this MISSION.

The Next Heaven is what God is planning for those who set aside this time for him.

He is planning something Special for all those who are doing his GOOD PLEASURE, not looking to get
him to do theirs.

We came here to SERVE and be a part of getting God's Enemies under his feet. This whole
Time Line was about God getting the enemy under his FEET and then bringing in JESUS to wipe him
out of History completely.

Ephesians 1:4 According as he hath chosen us in him before the foundation of the world, that we should be holy and without blame before him in love: 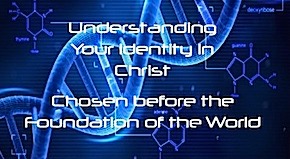 Eph 1:5 Having predestinated us unto the adoption of children by Jesus Christ to himself, according to the good pleasure of his will,

Eph 1:9 Having made known unto us the mystery of his will, according to his good pleasure which he hath
purposed in himself:

Phl 2:13 For it is God which worketh in you both to will and to do of [his] good pleasure.

Rom 8:28 And we know that all things work together for good to them that love God, to them who are the called according to [his] purpose.

Eph 1:11 In whom also we have obtained an inheritance, being predestinated according to the purpose
of him who worketh all things after the counsel of his own will:

2Ti 1:9 Who hath saved us, and called [us] with an holy calling, not according to our works, but according to his own purpose and grace, which was given us in Christ Jesus before the world began,

It was all PREDESTINATED ahead of time, Before TIME Started.
4309 nt
1) to predetermine, decide beforehand
2) in the NT of God decreeing from eternity
3) to foreordain, appoint beforehand

Rom 9:20 Nay but, O man, who art thou that repliest against God? Shall the thing formed say to him that
formed [it], Why hast thou made me thus?

Rom 9:21 Hath not the potter power over the clay, of the same lump to make one vessel unto honour, and another unto dishonour?

2Ti 2:20 But in a great house there are not only vessels of gold and of silver, but also of wood and of earth; and some to honour, and some to dishonour.

Vessel/ 4632 nt
1) a vessel
2) an implement
a) in the plural
1) household utensils, domestic gear
2) the tackle and armament of vessels, used specifically of sails and ropes
3) metaph.
a) a man of quality, a chosen instrument

His Purpose means that God has his Plan to accomplish something that we agreed to be a part of before hand. It is not our Time, and none of this is for our good pleasure.

The New Heaven that we will be Translated into is for our Good Pleasure.

We can look forward to that but this present Time is not for our Pleasure. We seek to be only Vessels Fit for the Masters use, doing his WILL, not our own.

1Cr 2:9 But as it is written, Eye hath not seen, nor ear heard, neither have entered into the heart of man, the things which God hath prepared for them that love him.

So if you are Looking to Escape this Time Line, or get anything out of it,  then you have forgotten where we came from, and what the plan is.

There is a Special Blessing for those who have Laid down their lives to Serve him, and aid in God's Good
Pleasure, of getting his enemy under his feet.

God Declared WAR on the Enemy at the Start of this Time Line. From A to Z it has all been about
WAR that was raging from the Celestial Dimension to this Terrestrial Dead Zone dimension called Earth.
(God calls this Dimension his Footstool.)

Mat 5:35 Nor by the earth; for it is his footstool: neither by Jerusalem; for it is the city of the great King.

Hbr 10:13 From henceforth expecting till his enemies be made his footstool.

FOOT STOOL is where we Live, it is where God puts his eneies who commit High Treason/ God Ambushed
his enemies. Then put them in his Prison, his Footstool, and sent Jesus in to Destroy him and all his works.

We will  Be Translated out of this  Foot Stool Dimension, then God's enemies will go up in Flames when
we are taken out at the Last Trumpet. Then the Fallen Angels will have an Eternal  Death. Burn Forever.

2 Peter 3:12  Looking for and hasting unto the coming of the day of God, wherein the heavens being
on fire shall be dissolved, and the elements shall melt with fervent heat?

IT WAS FINISHED 2,000 years ago. Finished means THE END.

FORE KNOWN means we all knew each other OUT SIDE OF TIME.  We all Volunteered for this Mission.

2Ti 1:9 Who hath saved us, and called [us] with an holy calling, not according to our works, but
according to his own purpose and grace, which was given us in Christ Jesus before the world began,

Who's Pleasure are you doing? Yours, or God's?

JOB 38: 7 When the morning stars sang together, and all the sons of God shouted for joy?

Before the Foundation of this World, simply means,   BEFORE TIME STARTED,  OUTSIDE OF
TIME , where there is NO TIME,  where  We Travel  together as Travelers on an Endless Journey/
Where we all know  one another. Where this Evil Age will never come to mind,  and we will
Move on in our Timeless Journey going Beyond where we have not been yet, discovering New
Adventures Beyond Time and Eternity. 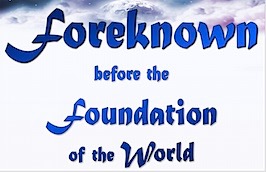