HISTORY of GREAT FAITH/ ACCORDING to STEWARD of the MYSTERIES

Remember that  our  Great Men and Women of FAITH/ Had NO INTERCESSOR / NO Bible, NO Holy Spirit

THEY where OVER COMERS  and they Had No JESUS.

How can anyone today NOT OVERCOME  since we have an INTERCESSOR who has already OVERCOME, and we OVERCOME  through him, as he speaks to us by his Spirit.

The Book of JOB is the oldest book of the Bible, so our History starts with JOB. Job is the REAL FATHER of FAITH since Job is the one who gets in God's Face and begins his complaint about there being NO INTERCESSOR, or NO daysman betwixt God and Man. Job complains to GOD and tells God what he should do.

Job 9:32 For [he is] not a man, as I [am, that] I should answer him, [and] we should come together in judgment.
Job 9:33 Neither is there any daysman betwixt us, [that] might lay his hand upon us both.
Job 9:34 Let him take his rod away from me, and let not his fear terrify me:
Job 9:35 Then] would I speak, and not fear him; but [it is] not so with me.
Job 19:6 Know now that God hath overthrown me, and hath compassed me with his net.
Job 19:7 Behold, I cry out of wrong, but I am not heard: I cry aloud, but [there is] no judgment.
Job 23:6 Will he plead against me with [his] great power? No; but he would put [strength] in me.
Job 23:7 There the righteous might dispute with him; so should I be delivered for ever from my judge.

JOB OPENS the DOOR by PRAYER unto God for a Go between that will Reason with God, for Man.

ABRAHAM was the MAN who was able to receive, by FAITH the PROMISE of God that would answer Jobs Prayer.

Yes, JESUS was the Out Come of God answering JOBS prayer, or complaint.

The entry Old Testament is about Men of FAITH fighting the Armies of the Aliens ( satan's seed, the Fallen Angels who became the off spring of the Giants, and all the Tribes of their descendants

Hebrews 11:34 Quenched the violence of fire, escaped the edge of the sword, out of weakness were made strong, waxed valiant in fight, turned to flight the armies of the aliens. 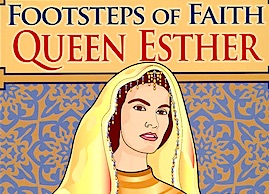 ESTHER is a WOMAN OF GREAT FAITH

Yes this woman Stood up for her own NATION and went against all Royal Protocol to Defend her people. She was a GREAT WOMAN of FAITH who used Godly Strategy to help her expose the lies of the devil. She SAVED a WHOLE NATION with her cunning and beauty. God Honored her FAITH.

Daniel and his friends STOOD UP by NOT WAVERING from their FAITH in the Face of Certain Death. Remember they where living in Exile, not their own homeland, and they had a very cushy life living in the Palace.

But they Refused to Obey the King and their FAITH was Put to the Ultimate Test and God Honored them, and stood with them in the Fiery Furnace.

Daniel 3:25 He answered and said, Lo, I see four men loose, walking in the midst of the fire, and they have no hurt; and the form of the fourth is like the Son of God.

Mary had FAITH to give Birth to the SON of GOD. She was a Teenager. So this Story should be Told Loudly to the Teens of Today what God can do in your Life if you are Looking to Serve and Honor him.

She likened herself as the Lord's bondslave. Do you know any Teenagers Serving the Lord like that today?

LUKE 1:38 And Mary said, “Behold, the bondslave of the Lord; be it done to me according to your word.” And the angel departed from her.

( MARY Received by FAITH all the Words the Angel spoke to her and became the MOTHER of GOD. so read the whole conversation.)

Then there was Mary Magdalene who would not leave JESUS even after he was DEAD. She was still Pursuing him, and looking to take care of him herself after his Death.

John 20:15 Yeshua said to her, “Woman, why are you weeping, and whom are you seeking?” But she thought he was the Gardener, and she said to him, “Sir, if you have taken him, tell me where you have laid him; I will go take him away.” 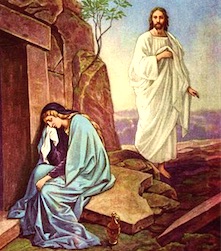 Her FAITH brought JESUS to her Personally, in a State that no one else has ever seen but her.

JESUS stood Still between Heaven and Earth to say HI to Mary, on his way out of here. WOW!! (TIME STOOD STILL while JESUS visited with Mary Magdalene, a woman who sat at JESUS feet daily.)

Here in this MOMENT JESUS is giving a WORD to a WOMAN, to give to the Men, there by settling Once and for all Time Women’s Place in the NEW KINGDOM. JESUS Liberated WOMEN forever in this MOMENT.!!!

John 20:17 Jesus says to her, "Do not touch Me, for not yet have I ascended to the Father. Now go to My brothers and say to them, 'I am ascending to My Father and your Father, and to My God and your God.'"

Men still do not get it.

Most of the other examples are Weak compared to these.