THE MYSTERY OF THE WILDERNESS 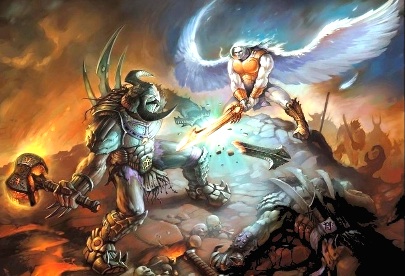 We have been hearing about Gladiator Shows that where Held in Big Arena's during the Roman Days. They sound very Barbaric to us. But the original Architect of these Shows is Satan himself. This was the Fallen Angels ARENA, that they Created as Venomous, Predators, who roam around seeking whom they can Devour.

The Roman Arena was just a down graded version of their Original ARENA.

These Predators Inhabit the outer regions of Space. This is what is Called the WILDERNESS, which is now a Waste Land. This is the enemies territory.

This is where JESUS and his ANGELS fought a Battle for 40 Days, as the Beast Fighters, in the Gladiator Arena of the Wilderness or Waste Land of Space.

It certainly does not mean the local desert!!

Mar 1:12 ¶ And immediately the Spirit driveth him into the wilderness.

Mar 1:13
And he was there in the wilderness forty days, tempted of Satan; and was with the wild beasts; and the angels ministered unto him.

Luk 4:1
And Jesus being full of the Holy Ghost returned from Jordan, and was led by the Spirit into the wilderness.

Jesus was DRIVEN and TAKEN UP to the WILDERNESS by the Holy Spirit.

In Mark 1:13
These words are in the REAL GREEK Translation!!!!

Wild Game, Hunting, Destruction, Trap, to be a BEAST FIGHTER, in a Gladiator show. 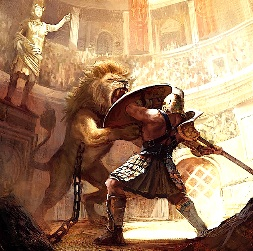 Jesus was driven into the Wilderness of SPACE to FIGHT with the Predators or Wild Beasts the Fallen Angels, where he was In a MULTI DIMENSIONAL ARENA, fighting as a BEAST FIGHTER for the captives of this Prison, Earth.

This was a 40-Day Gladiator, Wild Beast Show. JESUS was Fighting as a Beast Fighter for 40 Days for us, along with his HOLY ANGELS who where there Ministering with him.

This takes the Word MINISTERING to a whole new level.

Outer Space, or Wilderness, is the Enemies Domain. This is his ARENA, and this is where he puts on SHOWS for the entertainment of the Fallen. He thought JESUS would be easy Prey.

1 Peter 5:8
Be sober, be vigilant; because your adversary the devil, as a roaring lion, walketh about, seeking whom he may devour:

Gulp down, Swallow, To eat, Down Fall, Defraud, beguile of reward..

So this was not just a Temptation, this was an ATTACK of the PREDATORS who Inhabit the Wilderness we like to call the UNIVERSE. ( as if it was some Lovely place we would one day like to visit? )

This Wilderness is Inhabited by the FALLEN ANGELS, who are constantly seeking whom they may Devour. Man is trying to go into outer Space, thinking this is a Place he can Conqueror?

JESUS was in the Wilderness of Space, where he fought as our GLADIATOR, our Champion.

He fought for us for 40 days, and the ENEMY LOST that round.

The HOLY ANGELS where there Fighting along with him, for us.

Angels ministered unto him, means they where Pursing in a hostile manner. They where suffering persecution and mistreatment with him. 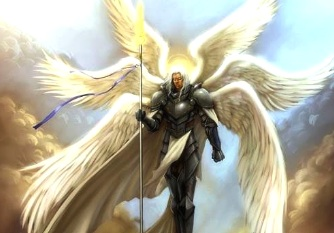 Col 2:15 And having spoiled principalities and powers, he made a show of them openly, triumphing over them in it.

This was the Battle of the AGES and we have been reading right over it for 2,000 years.

OUR CHAMPION JESUS is a BEAST FIGHTER. HIS HOLY ANGELS are Also Beast Fighters, which leaves us as his HEIRS, the Next Generation of BEAST FIGHTERS?

THIS IS WHY WE are CALLED to be CONQUERORS, since these PREDATORS are who we are FACED with. YES JESUS over came them, BUT we OVER COME them through STANDING in his VICTORY.

We are to become the NEXT GENERATION of BEAST FIGHTERS. LIVING to RELIVE that VICTORY just to see the enemy Defeated once again.

Space is a wilderness, because the Fallen Angels have consumed all the resources there, and have made it desolate. It is empty of any Life. Only Predators roam there seeking something to devour. Predators that devour life in any form. Man is easy prey for them. There ways are over mans head to comprehend.

Outer Space is not the final frontier. It is the Dead Zone. The Wilderness.

Yes there was a WAR in SPACE and the Angels fought against the Dragon, the old serpent the devil, the Beast, and the Holy ANGELS WON, they Cast him down, and JESUS took him out.

THE SPIRIT is the FINAL FRONTIER.

Rev 13:5,6
And the beast was given a mouth uttering haughty and blasphemous words, and it was allowed to exercise authority for forty-two months. It opened its mouth to utter blasphemies against God, blaspheming his name and his dwelling, that is, those who dwell in heaven.

2 Thess 2:8
Then the man of sin, the lawless one will be revealed and the Lord Jesus will destroy him by what he says. When the Lord Jesus comes, his appearance will put an end to this man, with the splendour of His Coming.

Being led, or carried by the Spirit is a Real event. LED UP of the SPIRIT.

Referred to throughout Ezekiel.

In Kings, and even in Acts.

Acts 8:39
And when they came up out of the water, the Spirit of the Lord carried Philip away, and the eunuch saw him no more, and went on his way rejoicing.

Or just Carry you away to another Place.

The Word Wilderness in OT/ means
mouth.
to lay snare, to plot against, to bring in order to subdue. to put words in order. threaten, warn / .