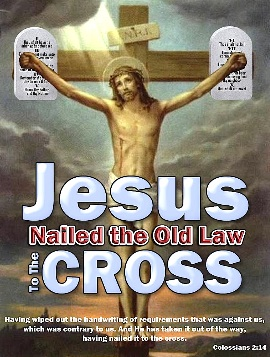 NO LAW/ NO SIN

Rom 4:15 Because the law worketh wrath: for where no law is, there is no transgression.

Rom 5:13 For until the law sin was in the world: but sin is not imputed when there is no law.

Rom 6:10 For in that he died, he died unto sin once: but in that he liveth, he liveth unto God.

Gal 3:13 Christ hath redeemed us from the curse of the law, being made a curse for us: for it is written, Cursed is every one that hangeth on a tree:

Gal 3:14 That the blessing of Abraham might come on the Gentiles through Jesus Christ; that we might receive the promise of the Spirit through faith.

Ephesians 2:15 by abolishing the law of commandments expressed in ordinances, that he might create in himself one new man in place of the two, so making peace,

Col 2:13 And you, being dead in your sins and the uncircumcision of your flesh, hath he quickened
together with him, having forgiven you all trespasses;

Colossians 2:14 by canceling the record of debt that stood against us with its legal demands.

This he set aside, nailing it to the cross.

JESUS ABOLISHED the LAW. Abolished means VANISHED. DISAPPEARED, NOT COMING BACK EVER. 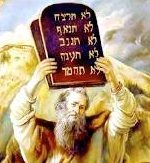 JESUS NAILED the LAW, which imputed sin, to the CROSS. NO SIN is Imputed to anyone who is
BORN AGAIN.

That is if you're Dead, and were Born of the Spirit of LIFE, how could you possibly Sin, when you Died? You're Buried. Either you DIED, or you did not get BORN AGAIN?

GRACE IS ABOUNDING TOWARDS us. RECEIVE the GRACE of GOD, by FAITH.

Stop Making the VICTORY of the CROSS NULL and VOID in your own LIFE.

WHERE THERE IS NO LAW, THERE CAN BE NO SIN.

The letter of the Law killeth.

2Cr 3:6 Who also hath made us able ministers of the new testament; not of the letter, but of the spirit: for the letter killeth, but the spirit giveth life.

Rom 7:6 But now we are delivered from the law, that being dead wherein we were held; that we should serve in newness of spirit, and not [in] the oldness of the letter.