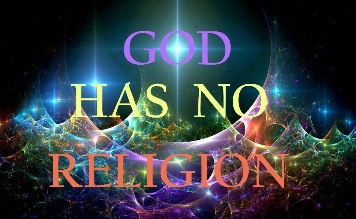 It is a difficult thing to teach people that 2,000 years ago JESUS ABOLISHED RELIGION. The LAW was RELIGION, and JESUS got Rid of it and Took it out of the Way. ABOLISHED means it VANISHED away.

Eph 2:15 Having abolished in his flesh the enmity, [even] the of commandments [contained] in ordinances; for to make in himself of twain one new man, [so] making peace;

2,000 years ago when people Got BORN AGAIN, they did not JOIN a Religion. THEY CAME OUT OF ONE. They were called Christians, since they left their Religion behind.

Christianity meant LETTING GO OF RELIGION - there is Nothing Religious about Getting BORN AGAIN. NOTHING. It is about Getting a NEW LIFE as a Son of God

It now means the EXACT OPPOSITE of what it ORIGINALLY meant???

Stop Claiming you are A CHRISTIAN and STOP being Religious?

If you are Born again you have NO RELIGION, since JESUS ABOLISHED it.

Either you are a Son of GOD, or you are still Under the Law, and nothing has changed for you.

Since Christianity is now a dirty word, STOP IDENTIFYING with it.

IT is OBSOLETE. You are a Son of GOD, born in the Image of JESUS.

You are BORN of the SPIRIT, and Christianity is now a Meaningless Word.

Either you are Part of another dimension of LIFE in the Spirit, or you are still Stuck in the Flesh?

2 Cr 5:17 Therefore if any man [be] in Christ, [he is] a new creature: old things are passed away; behold,
all things are become new.

There is a BIG MOVE by the enemy today to Persecute Christians because Christians have Dragged their FAITH down to a Religious level.

People are trying to Persecute others due to their Religion around the world?

WHY do you want to be a part of Something that GOD was done with 2,000 years ago?

Christianity was supposed to Mean "RELATIONSHIP with GOD," NOT RELIGION.

If you do not Understand that Christianity meant RELATIONSHIP, not RELIGION, then I doubt you are Born Again?

GOD'S next MOVE OF THE SPIRIT, is going to SEPARATE those who are BORN AGAIN from all Forms and Categories or Labels of Religion.

Get the WORD "RELIGION" out of your Vocabulary and stop clinging to this BONDAGE.

Stop saying you are a Christian or whatever you claim to be - it is BONDAGE.

You Must STOP IDENTIFYING with Religion! It is Dead and Gone.

The enemy is going to Persecute those who are Religious.

YOU can Turn the Tables on his Plot simply by REFUSING TO SUBSCRIBE to Any RELIGION AT ALL.

SEPARATE YOURSELF FROM that CATEGORY. Do not allow the Enemy to Put you into a CATEGORY for RELIGION.

If someone asks you what Religion are you?? Your Answer should be: I HAVE NO RELIGION. GOD IS NOT A RELIGION, HE IS THE SPIRIT OF LIFE.

Stop Calling yourself a Christian, when it No Longer means what it was supposed to mean.

Start doing what you were told to DO: PROCLAIM THE GOOD NEWS.

The Good News is about Getting a New IDENTITY as the SONS OF GOD, and Losing your Earthly one.

JESUS is the SON OF GOD! Either you got Born Again to become A SON of GOD or you did not become Part of his Body. His Body is not a Christian, He is not a Catholic, or a Protestant, Muslim, Buddhist, or even a Jew.

He is the SON of GOD, and that is who you Are to IDENTIFY with. You cannot be called a New Creation and call yourself a Christian, since there is nothing Spiritually new about that.

If you got Born again to become a Christian, then you are not Filled with the Spirit, since calling yourself a Christian is Carnal. It has nothing to do with being BORN OF THE SPIRIT.

You were Baptized into his BODY, the SON OF GOD.

There is NO RELIGION in the SPIRIT.

LOVE is not a RELIGION.