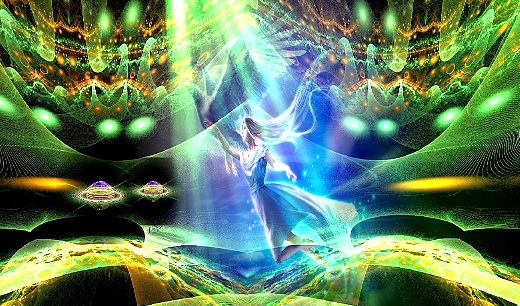 Our Perception of this Reality is False. Only the Holy Spirit can show you the TRUTH, But he will only do that for those who are the True Seekers. The World is full of those who think they no the Truth?

There are many conspiracy theories, many new concepts of reality, and all of them are False. Seekers are those who no that our Perception of Reality is limited and that what we no is mostly False. They are seeking the Mind of Christ for his Revelation of the Truth There is nothing Religious about JESUS. The Truth has nothing to do with Religion. So you have to Get over trying to find any Truth in any Religion.

The Bible is not about Religion, it is about getting Rid of Religion/ It is a History of Religious Bondage. The Fallen Angels created all Religions to confuse the Truth. The Truth will set you FREE, but not if You turn it into a Religion. Truth is not a Religion, The Bible is Truth, But it can not be understood Unless the Spirit of Truth Reveals it unto you.

It is a Supernatural Book your Carnal Mind can not Grasp. It will read Religion into it. Without the Holy Spirit as your Teacher, your Carnal Mind will Keep you in the wilderness of Religion. Thousands of years ago God sent us a Message. This was a Multi-Dimensional Message, ( we call The Bible ) sent from Outside of Time, into Time, so that throughout Time, everyone could have access To the Message.

It was sent Ahead of Time to give Everyone enough Time to hear the message, THE TRUTH. Since the beginning the Fallen Angels, who could not stop the message, spend all their time confusing, And distorting it, any way they can.

THE TRUTH will now be REVEALED. God is much BIGGER then you and I are able to Imagine.!! Our silly idea's of planets and solar Systems, are merely Prop's for a Virtual Reality we call a Universe. God calls this dimension his FOOTSTOOL.  Means inferior position, means Terrestrial dimension, which means PRISON.  It is also called an Evil Age, which means it is a Time Line/ a span of time.

It is also a Copy or Counterfeit of something Real. A Prop for a Stage Play. God creates Time Lines like a Movie Producer would create a Movie. Worlds without end, worlds means span of time, not planets. He folds up one when he is Finished and starts a New World, new age, New Time line. From A to Z, they are Finished before they start.

God can change his TIME LINE whenever he wants to, He can Stop it, rewind it, Erase it. He Can add to it/ He himself can Enter Act with it. He is the Time Line Weaver. He makes Time do whatever he wants Time to do, HE IS GOD, He INVENTED TIME. Once you Grasp that God controls Time like a Movie Producer, that he can Edit time whenever he Wants to, then God can give you a Revelation on what has been Happening in this Time Line. Jesus is a TIME WEAVER. See FOOT NOTES on this MESSAGE.

He created this Present Epic from A to Z, and it has been running for thousands of years, our Time. Before he created this Time Line, he already had a new script for a Brand New Time Line, Since this one now was an Ambush Episode to get rid of a cast called the Fallen Angels.

Gods New Epic will not include them. He created a script to delete them from all Time Lines. 2,000 years ago JESUS, the Time Line Weaver stepped onto the stage of his own Epic. He implemented a sequence of events designed to Erase or Abolish (which means erase ) Forever the Destroying Angels, or Aliens. (Who created sin /DNA )

Once he had defeated them by Living a Perfect Life in an imperfect world, The whole Time Line COLLAPSED. So 2,000 years ago the Time Line we think we are living in CRASHED. When JESUS said IT IS FINISHED, that met THE END.

This  Epic, Ambush, Evil Age never happened.  He Erased it.  He DELETED IT,  took it out of the way.  He Abolished It, which means it VANISHED. As the Producer of the TIME LINE he determined he was Done with it, He Canned it.

Now Moving on to the Next Time Line, New Epic where in Righteousness dwells.  So our Perception still thinks the Time line is going. We have not yet caught up with what Happened 2,000 years ago. The Time Line has been Collapsing in slow motion, like a time Warp moving towards the End. We are now Waking up to Realize that something in our Virtual Reality, Dimension, and Our Present day concepts about what is going on,  are all useless and Obsolete.

Mother Earth is merely a Decaying Prop, and the Universe was rolled up like a scroll and Done away with 2,000 years ago, so it is Falling apart upon itself as the days are shortened. CRASHING. We are racing to a point of this already Ended Epic, where the ending Credits are all that is Scrolling by.

We chose to be FOOTSTOOL SOLDIERS, in this Footstool dimension, under Gods Feet, Before it ever started. We volunteered for this Mission, before Time started. We came here to Ambush, and get the enemy UNDER GODS FEET/ so we could resume Our Real Life, where in Righteousness dwells, in New Jerusalem, New Heaven, New Time Line.

Those who have put on Christ will now become the next TIME LINE WEAVERS. This was what the battle started over/ This is what the Fallen Angels desired to be. They wanted the Power to create Real Time, but they got Virtual Reality instead. This is Why they wagged War from the Celestial dimension down to this one.

They wanted to destroy the Seed of Promise, Heirs of the Keys to Gods Kingdoms, Heirs Of the Mind of Christ, where in are Hidden all the Keys to all the Mysteries of TIME and Beyond.