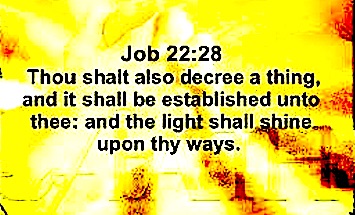 Mark 11:23  For assuredly, I say to you, whoever says to this mountain, ‘Be removed and be cast into the sea, and does not doubt in his heart, but believes that those things he says will be done, he will have whatever he says.

SPEAKING to the MOUNTAIN

Donald Trump is CRASHING our Reality with his Words. He is Proof that we live in Virtual Reality, which is created by Faith filled Words.   He has more Faith in himself then most people have in their God.  Spoken Words of Faith    like Make America Great again.

So this Virtual  Reality has to Get inline with Spoken Words filled with FAITH. That is how you program this Time Line.  GOD SAID, let there be LIGHT.  GOD SPOKE and it WAS.

Mark 11:23 For assuredly, I say to you, whoever says to this mountain, ‘Be removed and be cast into the sea, and does not doubt in his heart, but believes that those things he says will be done, he will have whatever he says.
Prov 18:21 Death and life are in the power of the tongue: and they that love it shall eat the fruit thereof.
Prov 11:11 By the blessing of the upright the city is exalted: but it is overthrown by the mouth of the wicked.

What Trump is SAYING is a GIANT EXAMPLE or Illustration on how to Create your own REALITY.  Speaking to the Mountain, other wise known as the Swamp.

DRAIN THE SWAMP/  This is like saying Expose the Lies of the devil. UNMASK HIM. This is what all the Warfare and non-stop CHAOS is about. The LIES have been EXPOSED. The Mountain  is Crashing.

The Mouth of the wicked is continually overthrowing our Nation: The Media / The Lies of the devil / Fake Reality.

THIS IS A REALITY CHECK.

Luke 16: 8  The master commended the dishonest manager for his shrewdness. For the sons of this world are  more shrewd in dealing with their own generation than the sons of light.

LUKE’S  Statement is an indictment on the so called  Body of Christ. The Sons of Light have NO IDEA how to  Speak FAITH FILLED DECREES. They have NO FAITH in their Own Spoken Words, let alone GOD’S.

We are to Walk by FAITH, not by sight ( lies of the devil, Fake News, Fake Reality. )

While  Speaking Words of FAITH and BLESSING.  Otherwise we are Overthrowing our own Reality.

DRAIN your own SWAMP.  Get your LIFE, your MOUTH in God’s Order and Get your own Words to Line up with Speaking the Truth in Love. Speaking FAITH FILLED DECREES, that Alter Life. 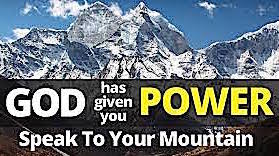 Speak to the Mountain in  your own Life and Confess you are  Doing the Greater Works. You are Becoming Greater and Greater, Walking by FAITH, and Doing Exploits in the Name of JESUS.

Return to Vision of USA