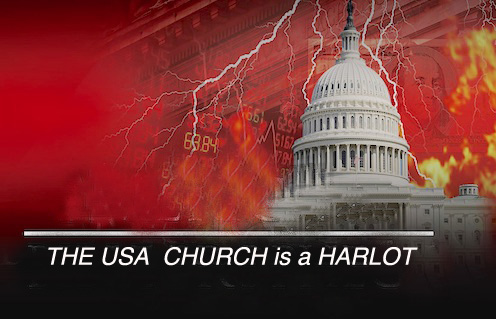 USA CHURCH is a HARLOT Part 2

The WORD of the LORD / STOP PROSTITUTING the GOSPEL

Judgment begins at the House of God

1 Peter 4:17 For the times come that judgment must begin at the house of God/ and if it first begin at us, what shall the end of them that obey not the gospel of God?

THE JUDGMENT is COMING on the HARLOT USA CHURCH/ Who has now become the seed of GEHAZI.

ELISHA is a Type of a Real Man of God. While his servant Gehazi is an Example of the HARLOT, the USA CHURCH.

We have an example in ELISHA, that has not changed. A Person who God Anoints with his gifts, is to give freely expecting nothing in return.

They CHEAPEN the GOSPEL and they all act like a Prodigal Son. Not SONS OF GOD, they are as HARLOT’S, prostituting my Gifts for Gain.

The leprosy therefore of Naaman shall cleave unto thee, and unto thy seed for ever. And he went out from his presence a leper as white as snow.

The LEPROSY that Came on GEHAZI is coming on those who are his OFF SPRING, his Seed. The Seed of a Beggar / wanting to get gain from the gospel.

If you are Dragging the Gospel and the Gifts of the Spirit Down to the Level of BEGGING for Gain, then you are going to be JUDGED as the Seed of GEHAZI.

You have become LEPERS.

THE JUDGMENT has BEGUN. The Beggars will be cast out. I AM CLEANSING MY BODY to REFLECT my Character.

MY SONS ARE NOT BEGGARS!

Matthew 10:8
Heal the sick, raise the dead, cleanse those who have leprosy,[a] drive out demons. You received without paying; give without pay.

Acts 3:6
Then Peter said, Silver and gold have I none; but such as I have give I thee: In the name of Jesus Christ of Nazareth rise up and walk.

Acts 8:20
Then fell she down straightway at his feet, and yielded up the ghost: and the young men came in, and found her dead, and, carrying her forth, buried her by her husband.

Acts 5:10
But Peter said unto him, Thy money perish with thee, because thou hast thought that the gift of God may be purchased with money.

Daniel 5:17
Then Daniel answered and said before the king, “Let your gifts be for yourself, and give your rewards to another. Nevertheless, I will read the writing to the king and make known to him the interpretation.

Jesus cast out those who Sold merchandise in the temple. He overthrew the money changers.

Matt 21:13; And said unto them, it is written, MY house shall be called the house of prayer, but ye have made it a den of thieves.

JESUS got Rid of Money Grabbers selling merchandise in the church. What would he say today about everyone Selling the Gospel for GAIN?

The WORD of the LORD to the HARLOT USA CHURCH is: STOP PROSTITUTING the GOSPEL!

Rev 2:17 He who has an ear, let him hear what the Spirit says to the churches. To the one who conquers
I will give some of the hidden manna, and I will give him a white stone, with a new name written on the
stone that no one knows except the one who receives it.’

USA CHURCH is a HARLOT
part one

Had a Dream Last night and the Lord was talking and he just said.

The Church in the USA is a HARLOT, saith the Lord.

Rev 3:14
And unto the angel of the church of the Laodiceans write; These things saith the Amen, the faithful and true witness, the beginning of the creation of God;

Rev 3: 15 I know thy works, that thou art neither cold nor hot: I would thou wert cold or hot.

Rev 3 :16 So then because thou art lukewarm, and neither cold nor hot, I will spue thee out of my mouth.

2 Peter 2 :15
Which have forsaken the right way, and are gone astray, following the way of Balaam
( false teaching ) the son of Bosor, who loved the wages of unrighteousness;

So The HARLOT has Gone after False Teachings and ends up being just Luke Warm towards God, so the Church has FORSAKEN their First Love and Gone a WHORING after the things of this World.

Acts 3:6 Then Peter said, Silver and gold have I none; but such as I have give I thee: In the name of Jesus Christ of Nazareth rise up and walk.

Laodicea = "justice of the people" It was the seat of the Christian church.

a city of Phrygia, situated on the river Lycus not far from Colosse. It was destroyed by an
earthquake in 66 A.D. and rebuilt by Marcus Aurelius.

2 Peter 2 :15
Which have forsaken the right way, and are gone astray, following the way of Balaam
( false teaching ) the son of Bosor, who loved the wages of unrighteousness;