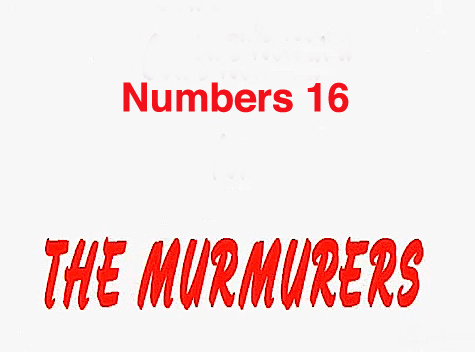 1 Corinthians 10:10
Neither murmur ye, as some of them also murmured, and were destroyed of the destroyer.

This is an EXAMPLE  on how God responds to those who are Coming Against his Appointed Leadership.

A Group of complainers, murmurers come against Moses & Aaron and are seeking to take them down/
Asking them who do they think they are ?  ( sound like anyone you know ? )

This is how the Lord deals with this up Rising against the Leaders of the Nation.

Numbers 16: 21 Separate yourselves from among this congregation, that I may consume them in a moment.

God SUPERNATURALLY  removes them.  They Disappear.  ( read the chapter )

Then another Group  of Murmurers  come against them, complaining about how they are dealing with the uprisers.
So  then the LORD LOOSES  a PLAGUE on the whole Nation to wipe out  the Murmurers against his Anointed Leaders.

The PLAGUE  is the OUTCOME  of  people constantly Complaining about their Leadership, as if GOD had nothing
to do with it.

THE USA  is Reaping what it has Sown/  The Plague is the out come of  the Nation Murmuring against who God has Appointed.

Daniel 4: 17  This sentence is by the decree of the watchers, and the decision by the word of the holy ones:
that the living may know that the Most High ruleth over the kingdom of men, and giveth it to whomsoever
he will, and setteth up over it the basest of men.

The Atonement  that Jesus already Paid for will still the Plague/ as you Repent of your own Murmuring.

Numbers 16:47  And Aaron took as Moses commanded, and ran into the midst of the congregation; and, behold,
the plague was begun among the people: and he put on incense, and made an atonement for the people.

Numbers 16:48 And he stood between the dead and the living; and the plague was stayed.

Romans 5:11 And not only so, but we also joy in God through our Lord Jesus Christ, by whom we have now
received the atonement. 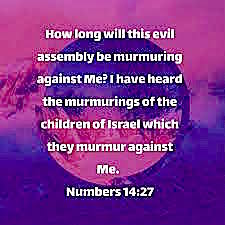