The Next Dispensation of the Incorruptible Seed.

GODS SPOKEN WORD to ABRAHAM produced, JESUS. JESUS Is the WORD Made Flesh.
JESUS  SEED is the SPOKEN WORDS he Planted.

JESUS SAID this of his own Death.

Jhn 12:24
I tell you the truth, unless a kernel of wheat is planted in the soil and dies, it remains alone.  But its death will produce many new kernels plentiful harvest of new lives.

Jhn 12:24
Verily, verily, I say unto you, Except a corn of wheat fall into the ground and die, it abideth  alone:
but if it die, it bringeth forth much fruit

Jesus planted himself as A SEED, knowing that his Seed, would Produce Fruit after his likeness, According
to his WORD. Only the Incorruptible Seed keeps on Producing a More SUPERNATURAL SEED as it GROWS.

Rom 8:29 For whom he did foreknow, he also did predestinate to be conformed to the image of his
Son, that he might be the firstborn among many brethren.

We where Predestinated to become his Seed and continue to Re Produce more incorruptible Seeds etc.
In other Words we are the WORD. ( the offspring of JESUS )

2,000 years ago the Apostles had only the Old Testament and what they had seen and witnessed Jesus teaching while he was here. They wrote all this down and it has become the New Testament for us.

But they did not have a NEW Testament. They taught the SPOKEN Word, the doctrine of Christ.

They where Teaching the Gospel by the Spoken Words,  while writing it down as well.

When John wrote Revelation he was on an isolated Island and he wanted to make sure his Writings on his Visions where not changed after he was gone, or when they where found.

These verses  Rev 22:18, 19  would be like me writing my Mysteries and Publishing them on my Website and saying at the bottom of my Site or message:

COPY RIGHT PROTECTED. Do not add or take anything from this message.

Rev 22:18
For I testify unto every man that heareth the words of the prophecy of this book, If any man shall add unto these things, God shall add unto him the plagues that are written in this book:

These scriptures are the  ST JOHN  COPY RIGHT PROTECTION PHRASE.

The Body of Christ has taken this to mean that know one can have anything to Say from that Point on?As if the New Testament was put together at the Time John wrote this?

The NEW TESTAMENT did not come till over 300 years later.

When you become Born of the Spirit, your Words then become Spirit and Life as you Hold Forth the Word of Life. The idea that God has had nothing to say to us for 2,000 years is Scary?

We are Living in a 2,000 year old Shadow of a Dead Dispensation.

It is DEAD because it leaves his Body Living in the Past, Not the PRESENT, with KNOW EXPECTATION
of  his APPEARING.

The only expectation is DOOM and END TIME GLOOM/ And Silly RAPTURE, ESCAPISM.

The WORDS  that are being spoken through his Body now, will become the next Dispensation of the
Word  that will bring about a NEW DISPENSATION or the next Coming of the Incorruptible Seed.

The Seed that  keeps on Coming, keeps on Expanding and becoming More SUPERNATURAL as
it MOVES the Body of Christ into one MIND.

Heb 1:1 ฆ God, who at sundry times and in divers manners spake in time past unto the fathers
by the prophets,

Heb 1:2  Hath in these last days spoken unto us by his Son, whom he hath appointed heir of all
things, by whom also he made the worlds;

The word  SON here means Sons of Abraham.
Nt meaning of Son / strongs 5207
a Son
the children of Israel
Sons of Abraham
son of man  used to describe those who are born again (Lk. 20:36) and of angels and of Jesus Christ

I am a Son of Abraham, Joint Heir with Jesus Christ.

So GOD is Still Speaking to us, through his own Body, the Question is who is Listening? Who is
writing down the WORDS for the next Dispensation to Grow and Feed on?

If his BODY as his Sons are not Speaking Forth the Oracles of GOD, then we are not Born of his Spirit?
As his Body we must be saying what we hear our Father saying, and Speaking it Forth for others to Hear.
We are the Incorruptible Seed of JESUS, the Living Word made Flesh. HIS OFF SPRING.

Jhn 17:8       For I have given unto them the words which thou gavest me; and they have received them,
and have known surely that I came out from thee, and they have believed that thou didst send me.

Jhn 12:49
For I have not spoken of myself; but the Father which sent me, he gave me a commandment,
what I should say, and what I should speak.

The Next Dispensation is the Appearing of the Sons of GOD ( God's Grandson, the Heir)

The Next Generation of JESUS and his SEED that he Planted in the earth. The SEED that we
are Partakers of as his BODY.

Jhn 12:24
I tell you the truth, unless a kernel of wheat is planted in the soil and dies, it remains alone.
But its death will produce many new kernels plentiful harvest of new lives.

Jhn 12:24
Verily, verily, I say unto you, Except a corn of wheat fall into the ground and die, it abideth
alone: but if it die, it bringeth forth much fruit

He is the Incorruptible Seed and his Seed will ABIDE FOREVER, and will KEEP PRODUCING
into Eternity after his Likeness.

JESUS is telling us  that a SEED is coming that will PRODUCE his NEXT COMING.

THE NEXT GENERATION of the INCORRUPTIBLE / THE SPOKEN WORD OF GOD.

The Apostles put down the Words of what happened then, We are to be Putting down New Words
that will Produce what God is going to do Next.

God has already told us through Daniel what is going to Happen, but we must begin to Agree and CONFESS the VISION and Teach it to our Children's, Children's, Children. Just as the
Old Testament  Produced the New Testament.  We must Produce a New Dispensation for the
SONS of GOD  to use to Grow up by and Produce his APPEARING.

This Dispensation of the WORDS of GOD will Prepare the Seed to Come, to Become the
HEIR of All things.

YES, we must TRAIN up a NEW GENERATION from Birth as the SONS OF GOD, so
that they will GROW UP TO BE  that HEIR.  The Heir that DANIEL SAW in his Vision. 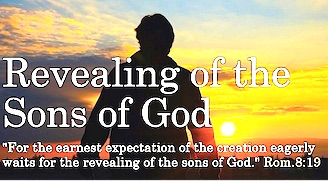 The NEXT GENERATION that will be BORN of the SEED JESUS Planted,  the TRANSFIGURED
Seed of JESUS, Manifesting in his Likeness, taking Dominion and Being Seated in Heavenly
Places with Christ Jesus.

A GENERATION  BORN to be the APPEARING of the SONS OF GOD.

THE NEXT GENERATION of the INCORRUPTIBLE SEED.

Journey of the Incorruptible seed Links

Return to Prophetic Words from our Future